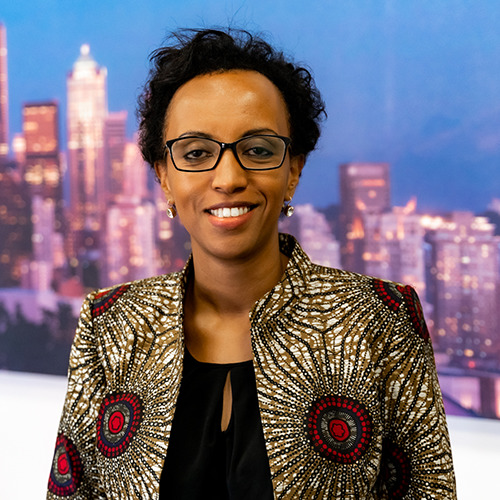 As the Regional Director of Microsoft’s 4Afrika Initiative, Amrote Abdella spearheads Microsoft’s investments in Africa across 54 countries. She works closely with the internal teams in the Middle East and Africa – and globally – to enable and accelerate digital transformation opportunities across the continent.

Before becoming Regional Director, Amrote was 4Afrika’s Director for VC & Startups, where she worked closely with startups supporting the innovation ecosystem in Africa. Prior to joining Microsoft, Amrote worked with the World Economic Forum in Geneva as an Associate Director for Africa. She also served as a Financial Analyst at the World Bank in Washington, and worked in micro-finance with the Global Hunger Project, an NGO based out of New York. Here, she oversaw projects across eight countries in Africa and worked with African women farmers, driving financial inclusion.

In 2017, Amrote was named one of Africa’s Top 100 Young Business Leaders, ranking 12th out of 100 leaders under 40 who are playing a major role in driving the continent’s economic development. In 2019, she appeared on the same list, this time ranking 10th. In 2018 and 2019, she was also recognized by Jeune Afrique as one of the top 50 influential leaders shaping digital evolution and supporting start-ups in the African continent.

Amrote constantly strives to learn new skills and believes in the values of passion, ambition and hard work. She also encourages all young women to have a grounding in STEM subjects. She holds a Masters degree in International Economic Development from the Heller School at Brandeis University in Massachusetts, and a Bachelor of Arts from Davidson College in North Carolina.