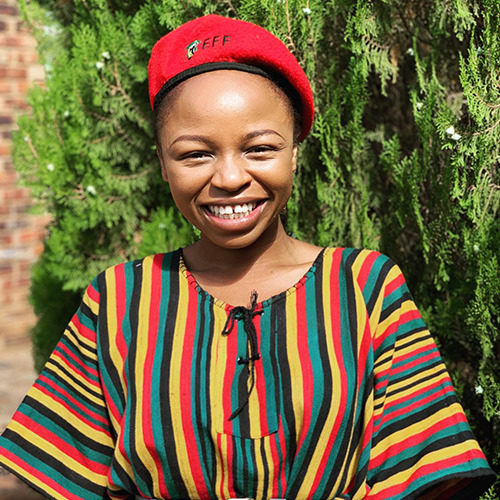 Naledi Nokukhanya Chirwa is a 26 year old Black Woman who was born and bred in Mamelodi, a township in the Pretoria city, and is currently in pursuit of her MPhil at the University of Pretoria.

She matriculated in 2011 at Mamelodi Secondary School, coming top of her year group and district D4 in Tshwane with 5 distinctions.

She was awarded by the Tshwane District Municipality for Diligence and Academic Excellence. In 2012, the Economics Faculty of The University of Pretoria awarded her for Community Involvement, Academic Excellence and Performance. In her art career, she has written and directed 5 plays and performed in numerous others.

Naledi Chirwa served in the national EFF Students Command leadership as the Transformation Officer and as the Spokesperson subsequently. In 2017 she was appointed as the National Media Liaison Officer of the Economic Freedom Fighters. She was the host of the radio show, Not Yet Uhuru, a feminist show created by the Soul City Institute and also served in rural areas as a Rise Women Advocate.

She has been involved in numerous feminist campaigns and demonstrations against Gender Based Violence, Free Sanitary Towel campaigns and fundraising, anti-rape demonstrations and awareness campaigns (Rhodes War, UP rape crisis). She portrayed the character of Nombuso on the popular series drama Ring of Lies on Mzansi Magic, and 15 year old Amy in a hit series Ambitions on ETV. Mail and Guardian’s Top 200 Young South Africans, 2017 (Politics and Governance) and Power FM’s #987Woman 2017 and 2019 are her most recent accolades.